laboratories – has shipped its products to other countries for 12 years. 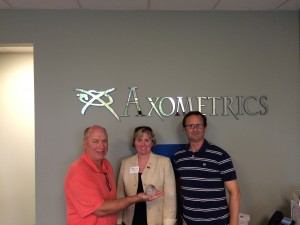 Put simply, its survival in the manufacturing industry depends on developing export markets.

“Axometrics exports approximately 95 percent of all products so, without these international markets, Axometrics would not exist,” said Charles W. Davis, the company’s CEO/President.

“Our target customers, which are mostly LCD (liquid crystal display) TV/screen manufacturers, already invest considerable resources in the area of quality control and testing, and our product offers them an effective and efficient solution.”

Companies like Samsung and LG use tools manufactured by Axometrics in Huntsville to assist in determining the quality of their LCD production early in the manufacturing process. Often, according to Matthew Smith, PhD (the company’s founder and Chief Technology Officer), the Axometrics precision machines are the only American tools in the giant Asian manufacturing facilities that produce the new large screen displays that are found everywhere these days.

The contribution of exports to Axometrics’ total sales has grown over the years from 50 percent to 95 percent, Davis said. The company, located in Thornton Research Park, has 16 employees, and each job is dependent on international business. Fourteen new jobs created over the last 10 years are a direct result of trade outside the U.S., Davis said.

Axometrics, founded in 2002, now exports to China, Taiwan, Japan, South Korea and Europe and has distributors throughout Asia, Europe and the Middle East. The greatest opportunity for growth is in Asia, according to Davis. “While trade barriers have not been a significant problem” for the company, he said, “the methods of doing business in various countries are definitely different.”

The company protects their intellectual property through several international patents. “We have two patents in place or pending in the countries we do business with,” said Davis and Smith.

The U.S.-South Korea Free Trade Agreement went into effect three years ago with a goal of eliminating tariffs on more than 95 percent of industrial and consumer goods within five years. That agreement, Davis said, “makes us more competitive in South Korea.”

In all, the U.S. has free-trade pacts with 20 countries and is now negotiating additional deals with Europe and 11 countries in Asia-Pacific. Davis believes that if import tariffs are removed from Axometrics’ products in those markets, then these latest agreements would benefit the company.

The Export-Import Bank (Ex-Im Bank) is the United States’ official export credit agency, and its charter is again up for reauthorization by Congress, this time with a deadline of June 30, 2015. The Ex-Im Bank promotes U.S. exports by making loans to American companies doing business abroad and insuring foreign receivables, and Axometrics has relied on the Export-Import Bank over the years.

“Ex-Im Bank’s export credit insurance is very important to our business,” Davis said. “We insure everything that qualifies through these programs, and it would hurt my company to lose this valuable resource.”

The process, precision and support offered by Axometrics distinguish them from their competition. The optical measuring tools they produce vary in size like the products they test and can be used in applications for small smart phone manufacturers to the largest of LCD TVs.

Several recent large orders (in value and actual large machines) from Asian customers will keep Axometrics busy around the global clock in the near future.