For over forty years in the street sweeping business, Schwarze Industries has been committed to providing a world class product along with unsurpassed service after the sale. Huntsville-based Schwarze, which produces street and parking lot sweepers and road-patching equipment, expanded its business outside the U.S. 35 years ago, just a few years after it was founded. It now exports to 38 countries.

Export sales have grown each year for the past five years and now account for 20 percent of total sales. The company expects its export sales to continue increasing by 10 percent each year.

Trade has also had an impact on Schwarze’s workforce. The company, which distributes parts and refurbishes sweepers in addition to its manufacturing business, has about 150 employees in North Alabama, and 10 percent of those jobs are dependent on exports. Schwarze Industries has been able to create eight new jobs over the last 10 years as a result of its international business.

The company offers a comprehensive line of sweepers, including models for parking area cleaning, industrial sweeping, mall and shopping center sweeping, airport runway sweeping, and other industrial and municipal applications. 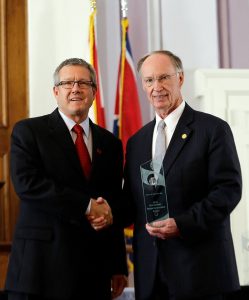 Schwarze Industries has been recognized for its global reach. The company was selected as a 2015 recipient of the Governor’s Trade Excellence Award, which recognizes companies in Alabama that excel in overseas sales and service.

According to Heyer, the Middle East, South Africa, Mexico and Australia present the greatest opportunities for Schwarze Industries in the future, and Russia is a market that the company would like the U.S. to open. Schwarze has already opened an assembly operation and company-owned dealership in Australia.

“Brazil and China remain the most difficult markets for the company to enter due to trade barriers,” Heyer said, “and the lack of joint ventures has been among the barriers to breaking into those markets.”

The company has had difficulty finding a partner that will sign a mutually beneficial agreement, rather than a one-sided deal where Schwarze would shoulder much of the risk and expense.

The U.S. is now negotiating trade agreements with Europe and 11 countries in Asia-Pacific, and Heyer said the deals could possibly benefit Schwarze Industries in those markets.

The firm is a corporate member of the North Alabama International Trade Association, a non-profit organization committed to increasing knowledge, interest and activity in international trade in North Alabama. “We’re impressed by the amount of resources NAITA has at its disposal to make doing business internationally easier and more efficient,” Heyer said.

According to Howard May, President of Schwarze Industries, “The opportunities we are seeing internationally continue to increase in many areas of the world. We are ready and able to meet the needs of these customers, and with the help of NAITA and its many resources, it will be much easier for us to do business as we develop these long term relationships abroad.”