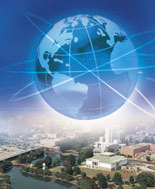 Past Presenters
WTD has hosted many prestigious guest speakers. Internationally recognized presenters have come to Huntsville on World Trade Day to share their insights on global strategic development. Prominent speakers have included:

This event draws approximately 300 attendees from North Alabama and the surrounding region.

The Conversation on Trade is a presentation by an elected or government official on the impact of trade and education on positive trade policy on the North Alabama Region. This event is a special opportunity to hear from Washington and Montgomery and share views from North Alabama’s business community.